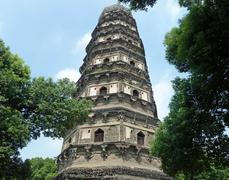 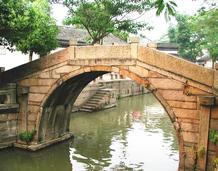 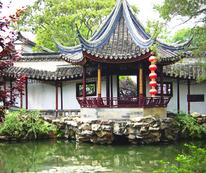 Suzhou is a small but charming city in the south of Jiangsu Province. It’s located on the Grand Canal a short train journey from Shanghai. Recognized for its exquisite scenery, masterful silk weaving, over 150 classical gardens and impressive canal-side houses, Suzhou has earned the nickname “Venice of the East.” Suzhou is best known for its fascinating true imperial gardens, complete with delicate design, hills and ponds,

terraces, corridors and towers. Suzhou’s beauty is captured by a

Chinese proverb: "In heaven there is paradise, on earth Suzhou

​Tiger Hill is a popular tourist spot located just outside of the city.

At the top, the pagoda of Yun Yan, a Song Dynasty leaning pagoda,

is built in brick to imitate wood architecture in 961.

This temple, named after the Tang Dynasty Buddhist poet Han Shan, is located on the outskirts of town on a small canal with a traditional bridge. Green foliage hangs down over the saffron walls, creating a striking and memorable visual.

The Master of Nets Garden is the smallest residential garden in Suzhou.

According to garden experts, it is one of the best gardens in China. The

garden demonstrates particular mastery of the techniques of relative

into distinct middle, eastern, northern and western parts. In the west,

it features man-made mountain and lake scenery; in the east, garden

courts; in the middle, the original site of the Xu's East Garden and

the Liu's Hanbi Villa; and in the north idyllic scenes. The ancestral

temple and the house lie to the south of the garden.

The Beijing-Hangzhou Grand Canal is the longest artificial waterway

in the world. It boasts a length of 1,794 kilometres and a history of more

than 2,400 years, and once provided a vital transportation link between

Beijing and resource-rich Hangzhou. The Jiangsu section of the canal,

which is still in use today, is 690 kilometres long. 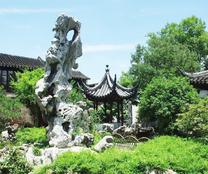 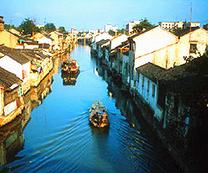