lower reaches of the Yellow River. Shandong covers an area of

156,000 square kilometres and has a population of over 90 million

people. It has a mild temperature with four distinct seasons.

Jinan is the political capital and industrial centre of Shandong

Province. Among China tourists, it is well known for its natural

springs surrounded by gardens, including the Gushing-from-the-

Ground Spring, the Black Tiger Spring, the Pearl Spring, and Five Dragon Pool. Qianfo (or Thousand Buddha) Hill is a mountain park offering spectacular views. Here, travellers can see about 600 Buddhist statues from the Sui Dynasty atop its rocky cliffs. Daming (or Great Light) Lake, located in the northern part of old Jinan, was once described by early China traveller Marco Polo as a "beautiful garden."

Qufu is the birthplace of the 6th century BC philosopher

Confucius and the home of his clan, the Kong. The Confucius

Family Mansion, a huge aristocratic mansion built in the Ming

Dynasty, is accessible to the public.

The Temple of Confucius, where many offer sacrifices to the

and 466 rooms, all well-designed and extremely ornate. In the

Great Courtyard, visitors can see a tree allegedly planted by

Confucius, the Xing Tan Pavilion where Confucius gave lectures to his disciples, and the Dachengdian (or Hall of Great Achievements), built during the Qing dynasty. Confucius Woods (The Graveyard of the Kong Family) is located one kilometre north of Qufu city. The graveyard is set amidst more than 100,000 trees, covers 200 hectares and is surrounded by a 7 kilometre brick wall. There are more than 100,000 graves of Kong descendants in this graveyard. The grave of Confucius himself is the most simple.

Tai'shan (Mount Tai) is the best-known and most sacred mountain

in China. It is now one of the national parks with an area of 426

square kilometres and at 1,545 metres above sea level.

Tai'shan is not simply a location of natural beauty. Throughout

sacrifices to heaven. Upon the mountain itself, travellers can see

historic relics and stone carvings from various dynasties, including

the Buddhist Diamong Sutra carved on a stone cliff. Climbing the

mountain is a tremendously gratifying experience. As Confucius said, "When one goes up Tai'shan Mountain, the world will be dwarfed beneath his feet."

seized it to compete with other Western powers. Germany returned

the town to China in 1922. Now it is a popular beach resort with a

atmosphere. The Qingdao pier extends 400 metres into the sea, to

the south of the city. Laoshan (Mount Lao) meets the majestic

Yellow Sea on its north shore.

Laoshan is another of the national parks of China. A dozen Taoist

temples remain here, preserved from the Song Dynasty and later. Qingdao is home to China's most famous brewery: the Qingdao Brewery. Built in 1903, the brewery produces Qingdao beer (Tsingtao) from quality oats, rice, hops and spring water from Mount Lao. It is much loved in China and abroad.

​Weifang is China's kite city. From April 1 to 10 each year,

Weifang holds an international kite festival. Both Chinese and

​Around the 15th of the first lunar month, locals observe a traditional

custom of lighting lanterns. The Lantern Festivals in Zibo have a

long history. Aside from lanterns, the festival features many folk art

performances such as xinzi (standing on a bamboo pole carried by

two people) and walking on stilts.​ 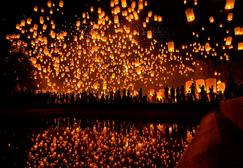 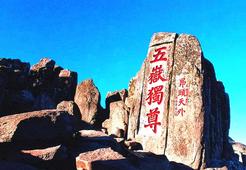 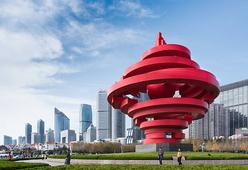 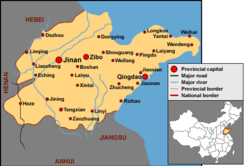 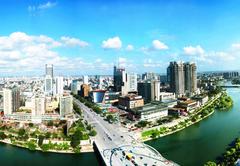 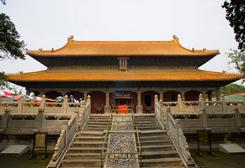