is one of China's seven ancient capitals. Comprising six city districts and

population of 6.16 million. Luoyang served as the capital of China for

nine dynasties over a period of more than 1,500 years. 96 emperors from

the prehistoric Xia Dynasties, through the Shang, the Western and Eastern

Jin established their seat of power here. As an ancient administrative centre,

Luoyang has had a significant influence on China's cultural heritage and

Although political upheavals in the 20th century destroyed some of its grand historical heritage, Luoyang still retains many significant ancient landmarks that draw China tours to these days. In and around Luoyang, China travellers will find the White HorseTemple, the first Buddhist temple in China, and the Longmen Grottoes, renowned as a treasure house of Buddhist culture and art. Luoyang is also famous for its natural beauty, which draws many tourists to the area.

The Longmen Grottoes are about 12 kilometres from ancient LuoyangCity, where two mountains meet the Yihe River. Here, China travellers can experience one of the three most important treasuries of Buddhist sculptures and carvings in China.

The grottoes were first carved in North Wei Dynasty, over 1500 years ago.

They were expanded through the succeeding East and West Wei Dynasties,

Since then, over 500 years of renovation and expansion have preserved this

cultural site as one of the best examples of Buddhist art in the world.

Spanning a length of around one kilometre, about 2,100 tiny niches and grottoes honeycomb the hillside. In the niches, travellers can see over 40 crematory urns, 3,600 inscribed stone tablets and over 100,000 Buddhist images and statues. The largest statue is 17 meters high, and some figures are as tiny as two centimeters.

The Longmen Grottoes are of great value in world sculpture history and have been listed in the World Cultural Heritage Site by the UNESCO. To protect such a valuable heritage site, the Chinese government and influential world cultural organizations share this site with the whole world, and the government performed a large renovation in 2003 to keep the grottoes in good condition.

Located 12 kilometres east of Luoyang city, the White Horse Temple is one

Chinese Buddhism. Although it is neither the largest nor the most beautiful

Buddhist monument in China, this temple has collected many beautiful and

important cultural objects that are well worth a look. It’s a must-see site for

The temple’s name refers to a legend in which monks on a white horse carried the first Buddhist scripture from India to the temple’s site, around 68 AD. Centuries later, the Tang Dynasty monk Xuanzang started his 17 years long pilgrimage trip to Indian from the temple. After returning, Xuanzhang became the abbot of the White Horse Temple, where he disseminated Buddhist scriptures for the rest of his life. 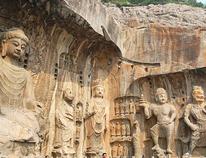 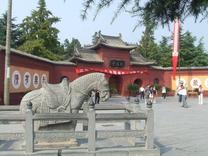 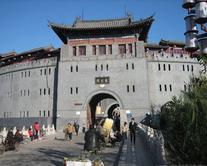