Lhasa , the capital of the Tibet Autonomous Region, is located along

the banks of the Lhasa River, a tributary of the Yarlung Zangbo River.

Lhasa ’s history goes back over 1,300 years. Literally translated as

"the sacred place," it has an abundance of sunshine and a reputation

as “the Solar City.” It is a centre of politics, economy, transport and

religious activities in Tibet, and the centre Tibetan Buddhism

There are many important and beautiful places of interest

in Lhasa, such as Potala Palace, Sera Monastery and Jokhang

Monastery. Lhasa's remoteness has helped maintain its original appearance and traditional lifestyle, particularly on Barhkor Street in the old part of Lhasa.

Here, China tourists can find traditional arts and crafts on sale. Despite its height and distance, Lhasa has become much less isolated in recent years; now, flights leave on a regular basis from Lhasa to Beijing, Chengdu, Chongqing, Xi'an and Kathmandu. The Qinghai-Tibet and Sichuan-Tibet highways are the main routes to the region.

Potala Palace, the most famous building in the region, was built in

the 640s during the reign of King Songtsan Gampo. Located on

Red Hill, to the west of old Lhasa, this 13-storey palace stands at

made of stone and wood, with walls averaging 3 metres thick.

Potala Palace is a renowned combination of Chinese palatial

Dalai Lama, the head of Tibetan Buddhism, would spend the winter

Legends claim that it hailed during the construction of this

was the last of the three principal Yellow Sect (Tibetan Buddhist)

monasteries to be built in Lhasa, and the only one of the three not

built into a mountainside. It was completed in 1419 under the

who travelled to Beijing and as far as Mongolia to preach

Buddhism and received the title “Tutor of the Empire.”

the time, which have been preserved and can be seen as part of China tour packages. Sera is built with a great sutra chanting hall, a college and 32 sections. It once housed nearly 10,000 monks. Sera has been listed as one of China’s national cultural relics since 1982.

a prime seat of Gelugpa (Yellow) Tibetan Buddhism. It was original

built in 647 AD. It is said the site was chosen personally by Tang

a unique compound of architectural styles. Jokhang is the spiritual

centre of Tibet and the holiest destination for all Tibetan Buddhist

Barkhor Street is found in the heart of Lhasa, circling Jokhang

Monastery. Literally "a pilgrim' s inner circuit", Barkhor is the

In the past, it was only a circumambulation circuit, where Buddhist

faithful would practice “one step, one kowtow” to show devotion.

Though it has attracted merchants, it still retains its status as a holy

Norbulingka, located to the west of Lhasa, is known as the Summer

Palace. Built for the 7th Dalai Lama in 1755, it was where the Lama

would spend the hot season, dealing with affairs of state, resting and

conducting religious activities. In the mid-March every year, the

Dalai Lama would move here until mid-October, at which point he

of 46 acres, and the palace comprises 370 rooms of different sizes. 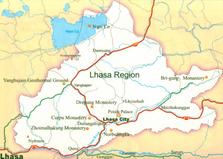 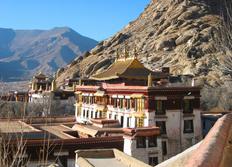 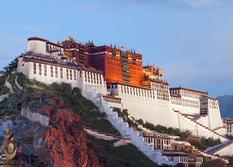 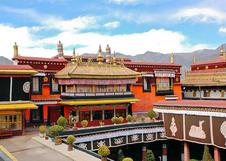 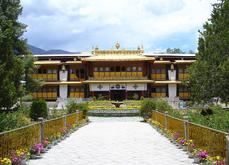 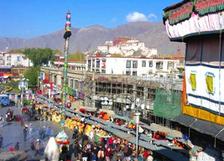