Mumbai is the capital of the state of Maharashtra. Formerly known

as Bombay, it is the most populous city in India, with an estimated

streets overflow with incredible sights, such as the centre of India’s

film industry, Bollywood. Mumbai is a highlight for travellers

whose ideal India vacation includes shopping: the city is full of

sits within the city limits, providing tranquil natural spots in the

middle of the crowded city.

Khajuraho
Khajuraho (from Hindi, “khajur” for date palm) is a city in the Indian state of Madhya Pradesh, 620 kilometres southeast of Delhi. The city was once the religious capital of the Chandela Rajputs, a Hindu dynasty that ruled this part of Indiafrom the 10th to the 12th centuries. Now, Khajuraho is a small town with a vibrant history. The Khajuraho temple complex is the largest group of historical Hindu temples, complete with famous erotic sculptures. The temples were built over a span of 100 years and are now listed as one of the Seven Wonders of India and a UNESCO World Heritage Site.

Founded by Sultan Sikander Lodi in 1506, Agra is an old city on the banks of the YamunaRiver. It achieved fame as the capital of the Mughal empire from 1526 to 1658, and remains a popular destination in any India tour package for its world famous Mughal-era buildings. These include the Taj Mahal, Agra Fort and Fatehpur Sikri, all UNESCO World Heritage Sites.

The Taj Mahal was commissioned by Mughal Emperor Shah Jahan

as a mausoleum for his favourite wife, Mumtaz. Constructed

generally considered the finest example of Mughal architecture. It

building styles. While the white-domed marble mausoleum is the

best known component of the monument, the Taj Mahal is actually

an integrated complex of elegant structures. A symbol of India, and

beautiful both for its architecture and its romantic history, the Taj

Mahal is a must-see on any India vacation.

Mughal emperor Akbar, starting in 1571. It is a magnificent city

carved predominantly from red sandstone, created as an act of

gratitude to a saint. It was abandoned in 1585, ostensibly due to

lack of water. This deserted city has two complexes: a royal

enclosure with palaces and official buildings, and a dargah for a

Sufi saint, with a mosque and a lofty gateway. It is located in

Agra Fort, also known as Lal Qila, FortRouge and the Red Fort of

Agra, is about 2.5 kilometres northwest of the Taj Mahal. The fort

is less of a military installation and more of a walled palatial city.

By most estimates, the fort was captured by the Akbar the Great in

the late 16th century. During his reign, Akbar shifted the government

of his empire from Delhi to Agra, and the fort was repurposed as a

royal estate. Akbar tended to build from red sandstone, often inlaid with white marble and intricate decorations. During the reign of Akbar's grandson Shah Jahan, the site was built up to its current state. Unlike his grandfather, Shah Jahan preferred buildings made from white marble inlaid with gold and semi-precious gems. He destroyed some of the earlier buildings inside the fort in order to remake it to his preferences.

After being deposed by his son Aurangzeb, the elderly Shah Jahan was imprisoned in this fort. Local legend says that he died in Muasamman Burj, a tower with an excellent view of the Taj Mahal. Agra Fort is also the site of one of the battles during the Indian rebellion of 1857, which ended the rule of the British East India Company and began a century of direct rule by Britain.

The city of Varanasi is located in North India on the banks of the river Ganges. It has a long history of being a religious, industrial and cultural centre of Northern India. According to myths, the holy city of Varanasi was founded by Hindu deity Shiva, making it one of the most important pilgrimage destinations in the country. It is one of the seven sacred cities in Hinduism. It is also an important city for Buddhism, as Gautama Buddha gave his first sermon nearby.

Varanasi was a commercial and industrial centre famous for its muslin and silk fabrics, perfumes, ivory works, and sculpture. During the time of Gautama Buddha (born circa 567 BCE), Varanasi was the capital of the kingdom of Kashi. Lord Buddha gave his first sermon at the nearby town of Sarnath. The city remained a centre of religious, educational, and artistic activities as attested by the celebrated Chinese traveller Xuanzang. Varanasi boasts its own style of classical Hindustani music, and has produced many prominent musicians, philosophers, poets and writers. The language spoken in the city is Bhojpuri, a dialect of Hindi.

Jaipur, popularly known as the PinkCity, is the capital of RajasthanState. Maharaja Sawai Jai Singh II, the ruler of Amber, founded the city in 1727. Built of pink stucco to imitate sandstone, the city is remarkable among pre-modern Indian cities for its wide, regular streets. Many India vacation packages include visits to Jaipur for sites including the Hawa Mahal, a palace built by Maharaja Sawai Pratap Sing, Jantar Mantar, an observatory built from stone and marble, and the Amber Fort, a magnificent complex of palaces, halls, pavilions, gardens and temples.

Jaipur has the distinction of being one of the best-planned pre-modern cities. While most Indian towns from its era were a chaotic mess of twisted streets, Jaipur was built and planned strictly according to the principles of Hindu architectural theory. By the end of the 19th century, the town grew into a prosperous city, with a population of 160,000. The city's wide boulevards were paved and lit with gas, and it became a centre for education, health and banking with several hospitals, colleges and art schools. In 2011, its population passed 3 million.

The Hawa Mahal forms part of the CityPalace, extending the Zenana

(the chambers for women). Its original intention was to allow royal

ladies to observe everyday life in the street below while remaining

unseen. It has five stories and is constructed of red and pink sandstone,

highlighted with white lime. The side facing the street outside the

palace complex has 953 small windows. The palace is famous for the

circulating breeze, which cools the palace and gives it its name.

The Jantar Mantar (“enchanted device”) is an observatory built between

consists of fourteen geometric devices made from stones that can

declinations of planets and more.

Jaipur, in Rajasthan’s old capital. Travellers in India can explore this

Drawing influence from both Hindu and Muslim architectural styles,

this palace is full of beautifully designed rooms and gardens.

Bharatpur is 176 kilometres south of Delhi. India vacation packages include a visit here to give visitors a chance to experience the natural beauty of India in the the KeoladeoGhanaNational Park. Home to over 300 bird species, including the common, demoiselle and rare Siberian cranes it is one of the finest water bird sanctuaries in the world. It is also an excellent place to see other animals. India travellers might see golden jackals, striped hyenas, jungle cats, nilgai, sambar, blackbuck and wild boars. The Keoladeo Ghana Bird Sanctuary provides unlimited opportunities for the bird watcher, wildlife photographer, nature writer and curious tourist. Keoladeo Ghana’s name refers to the location of the temple of Lord Shiva (Keoladeo) in the centre of the park.

The royal city at Fatehpur Sikri, situated 26 miles west of Agra, was built at the orders of the Mughal Emperor Akbar. It is predominately built in red sandstone. The Emperor built a magnificent city as an act of gratitude to a saint, made it the capital of his empire, and then, due to the shortage of water supply, the pristine complex was abandoned. This deserted city has two complexes. The first has the royal enclosure of the palaces and the official buildings. And the second dargah of a Sufi saint, with a mosque and a lofty gateway.

Kathmandu is Nepal’s largest city and capital. Once thought to be the fabled and elusive Shangri-La, Kathmandu has become a hub for independent travellers and tourists of all sorts.

Delhi is the capital city of the Federal Republic of India. Its ever-growing population of 22 million makes it the sixth most populous city in the world. The city has two distinct parts: Old Delhi and New Delhi. While Old Delhi surrounds on the Red Fort built by Emperor Shah Jahan between 1636 and 1658 (not to be confused with the Red Fort in Agra). New Delhi is the commercial and business hub of Delhi. Delhi was the capital of several empires in ancient India and has preserved many ancient monuments and archaeological sites.

Qutab Minar is the tallest brick minaret in the world, and an important

example of Indo-Islamic architecture. It is listed as a UNESCO World

Heritage Site. The Qutab Minar is 72.5 metres high and requires 399

steps to get to the top, although the climb is off-limits to visitors for

safety reasons. The diameter of the base is 14.3 metres wide while the

Construction of the minaret begun in 1193. With it, Qutb-ud-din Aybak,

the first Muslim ruler of Delhi, hoped to surpass the Minaret of Jam in Afghanistan. Only the basement was completed during his reign. His successor, Iltutmish, added three more storeys and, in 1368, Firuz Shah Tughluq constructed the final storey. The development of architectural styles from Aibak to Tuglak is quite evident in the different storeys. The minaret is made of fluted red sandstone and engraved with intricate carvings and verses from the Qur'an.

Humanyun’s Tomb is a spectacular demonstration of Mughal

architecture and the inspiration for the Taj Mahal. Listed as an

UNESCO World Heritage site in 1993, it is said that Haji Begum,

the widow of Humanyun, commissioned the Humanyun’s Tomb in

after independence. This building also contains the National

Museum and the beautiful Mughal Garden.

Also called the Lal Qila, the Red Fort is the largest historic

construction of the massive fort in 1648. The outer wall extends up

riverside to 33 metres on the city side. Attractions within the fort

include Chatta Chowk, which housed Delhi’s most skilled craftsman,

Meena Bazaar, where ladies of the courts would do their shopping,

and Naubat Khana, the heart of the fort where musicians would

entertain the emperor. India travellers will see Diwan-i-Amor, where

the emperor listened to the complaints of common people.

India Gate, originally called the All India War Memorial, was

lost their lives, particularly during World War I. This is the site of

a torch that has been burning continuously since 1971.

Goa is the smallest and youngest state in India. Goa has a complicated colonial history. It has been ruled by the Dutch, the British, the Turkish and, until 1961, the Portuguese. Goa is full of beautiful tourist spots with intricate churches and

temples, evergreen hills and majestic mountains. India tourists come most often to enjoy the beaches and the colourful

culture. It is also famous for feni, a locally brewed liquor popular among both tourists and locals. Goa is a place for travellers who seek sun, sand, food and wine, but it has its share of old forts and temples too.​ 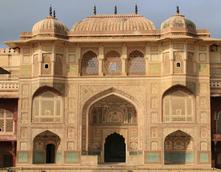 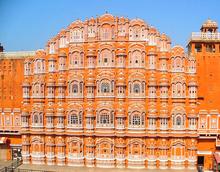 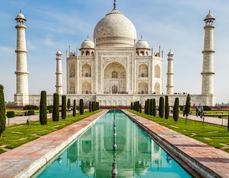 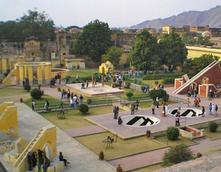 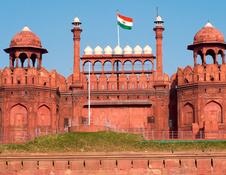 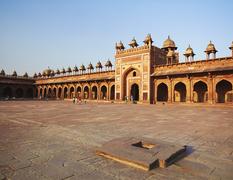 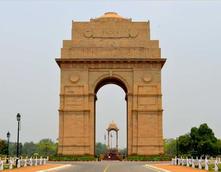 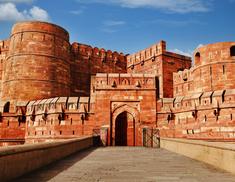 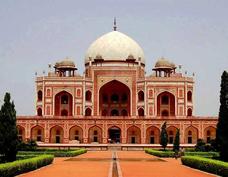 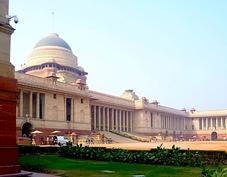 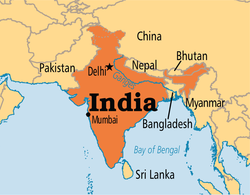 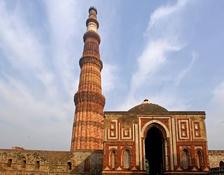