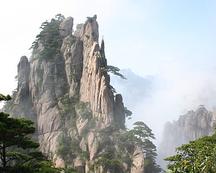 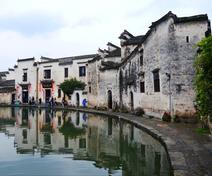 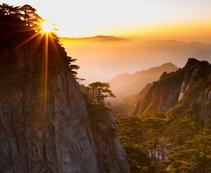 Huangshan, or Yellow Mountain, lies in the eastern part of China and

is best known for its beautiful scenery, which makes it one of the most

popular tourist destinations in China. The terrain around Huangshan is

mostly composed of granite mountains and forests. The Huangshan

area features 77 peaks that are more than 1,000 metres above sea level.

many of the region's scenic areas. The legendary pines, oddly-shaped

rocks, phantasmagoric clouds, hot springs and winter snows have given

Xidi Village is located at the south foot of Mt.Huangshan. It has been

called many names in its 1000-year history. Throughout the Ming and

Qing dynasties, it was the focus of several ambitious development

projects that left the town with hundreds of buildings, including historic

remain and can be seen by China travellers.

Travellers in Xidi will see a characteristic green stone memorial

archway with three rooms, four pillars and five floors, built during the

Ming Dynasty. It was erected in honour of the Hu, the principle family

Mount Huangshan (Yellow Mountain) is the name of the 72-peak

range lying in the south of AnhuiProvince. MountHuangshan is one

of China’s most celebrated scenic spots, famous for its mountain

cars to the top of the mountain.