Guilin is located in the northeast of Guangxi Zhuang Autonomous Region. Thanks to its magical natural scenery, it is considered to be one of the most beautiful cultural and historical cities in China. The landscape boasts thousands of kilometres of karst limestone crops that shoot up from a flat plain of fields and lush bamboo. Winding through the region, the Lijiang River can bring China tourists close to the beauty of Guilin on gorgeous river cruises. The region’s solitary hills, clear winding waters, and unique caves have caused many to say "the mountains and water of Guilin are the finest under heaven." Since the land between the peaks is flat, Guilin is an ideal place for riding bicycles.

The Seven Star Cave is a legendary residence of immortals. The cave zigzags about a kilometre deep into the limestone and contains more than 40 sites of interest, including varieties of stalactites, stalagmites, huge stone slabs and pillars.

Elephant Trunk Hill
​This iconic landmark has long been a symbol of Guilin. It sits

on the junction of the Yangjiang and Lijiang Rivers and

resembles an elephant with its trunk in the river. No China

vacation to Guilin is complete without a sight of this natural

The Folded Brocade Hill is also known as MountGui or Fengdong,

and consists of a series of peaks perfect for climbing. All have

superb views from their summits. Many of these mysteriously

A cruise on the LijiangRiver is a highlight of a visit to Guilin, and, for many, a highlight of China travel altogether. It rises from Cat Mountain in Xing'an county to the northeast, then winds its way through Guilin and Yangshuo. A 40-kilometre cruise from Guilin to Yangshuo is breathtaking and highly recommended for all China tours.

This fascinating hill rises out of flat ground, holding back the river flow. This forms a deep pool at the bottom of the hill. It is located in northeast Guilin, facing down the Lijiang River to the east.

Yangshuo is an ancient city built during the Jin Dynasty

upon hundreds of limestone hills dotting the countryside. Famous

Street is a favorite shopping spot for tourists. The fertile land

fruits such as oranges, tangerines, pomelos, and kumquats. 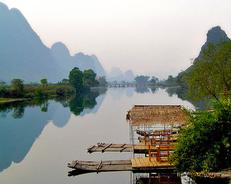 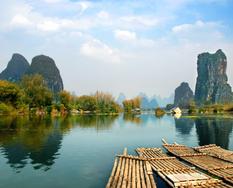 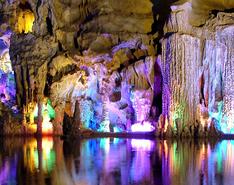 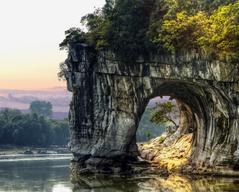