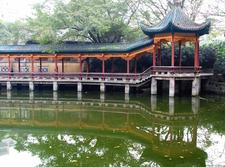 Home to 30 million people, Chongqing is perched high on cliffs

overlooking the confluence of the Yangtze and the Jialing rivers.

Historically, Chongqing has been Sichuan’s trading outlet for the

rest of China. Now, the city has become an important industrial

Chongqing also attracts many tourists, as it is a likely point of

departure or finish for any China tour package including a cruise

Springs) is located about 25 kilometres south of the city. Tourists can also take a picturesque boat ride along the Flowery Creek to the Caves of the Fairies.

special plant species as well as a newly built tower, the Liangjiang

Pavilion, which provides a view of the entire city. Eling Park is

one of the key state parks of China, and enjoys national protection.

Eling Park was built in 1909 as the home of a rich business man.

The park was originally called Edingling (Goose Nape Hill) due to

its narrow and steep shape that resembles the nape of a goose.

During World War II, Eling Park served as the home of Chiang

Kai-shek and his wife.

​The Chongqing Zoo is located downtown and features many

African Elephants. The zoo is also on the bank of the Yangtze

with views of the Three Gorges. It is best to go in the morning

so you can see the Pandas actively eating.

The Dazu Grottoes, an outstanding example of later Chinese

mostly on Buddhist subjects. The art of Dazu that emerged in 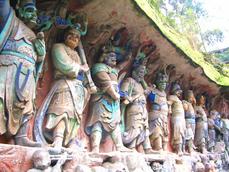 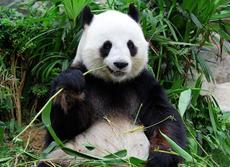 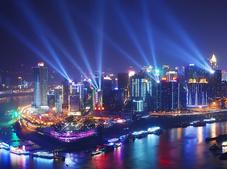