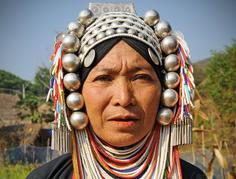 Chiang Rai, founded as the capital of the Lannathai kingdom in 1262 AD, has become the capital of Northern Thailand. This animated city is on the edge of the Ping River. Some Thailand travellers have noted that the city seems to have more motorbikes than inhabitants. Popular destinations in Chiang Rai include Meo Baan Huay Luk Chiang Dao Cave, Mae Kok River, the Long Neck hill tribe villages, the Akha hill tribe villages, and the river confluence known as the “Golden Triangle”. Thai tours also come here for Chiang Rai’s unique spiritual history: it was here that Thailand’s most revered Buddha figure, the Emerald Buddha, was discovered in 1432.

​The Akha are an ethnic group from China and Tibet. Most of the

the mountains of China, Laos, Myanmar (Burma) and northern

Thailand, where they are one of the six main hill tribes. About

and Chiang Mai at high altitudes. Tourists can visit many of these

villages on trekking tours from either one of these cities. They

speak a language in the Tibeto-Burman family.

An Akha village consists of bamboo houses on low wooden stilts with traditional thatched roofs. The Akha are expert farmers and hunters. In more touristy areas, the Akha supplement their income through the sale of handicrafts and woven clothing made using traditional skills.

(Burma), but many fled to northern Thailand during the 20th century. They speak a

language that belongs to the Kenmic group in the Tibeto-Burman language family.

Karen-Paduang women wear brass rings around their necks. These do not actually

make their necks longer, but distort the image of their neck to look longer. Grown

Karen-Paduang women wear up to 20 rings, and start adding them as early as age

The MaeKok River flows into northern Thailand from Burma just

north of Thaton. This river forms the border with Laos. In the past,

through scenic areas by hill tribes and bathing elephants. 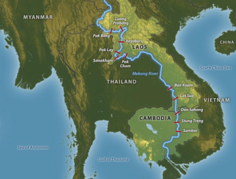