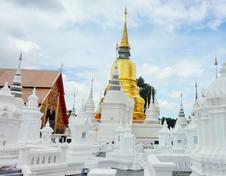 Chiang Mai, located approximately 700 kilometers north of Bangkok, is the second largest city in Thailand. It was established as the capital of the LannaThaiKingdom in 1296 AD. Chiang Mai is popular among Thailand travellers for seven centuries of beautiful temples set against gorgeous natural scenery. The most popular of these are Wat Phrathat Doi Suthep, Wat Chiang Man, Wat Phra Singh, Wat Suan Dok and the Wat Jet Yot.

​Wat Phrathat Doi Suthep, the best-known temple in the area, stands on

relics. According to legend, the site was chosen when a monk came

into the possession of the Buddha’s shoulder bone. He placed the bone

on the back of a sacred elephant. The elephant tramped over the hills,

then, coming to the future spot of Wat Phrathat Doi Suthep, trumpeted,

walked in a circle, then died. The onlookers took this as marking an auspicious place, ideal for a temple. The temple's location also affords Thailand tourists superb views over the city on clear days.

Wat Chiang Man is the oldest temple in Chiang Mai. It served as the

home for King Mengrai while he oversaw the construction of the city.

the Phra Sila (a marble Buddha) and Phra Satang Man (a crystal Buddha).

Wat Phra Singh, located within the city walls, was built in 1345.

Buddha, an image transferred here many years ago from Chiang Rai.

temple located just west of the old city wall. The temple was built by the

seasons. The temple is unique for its large, open-plan ordination hall, or

ubosot. On site, a large number of chedis house the cremated remains of

past Chiang Mai rulers. This temple is the site of the Mahachulalongkorn

Rajavidyalaya Buddhist University, one of the most important monastic

Tilokkarat in imitation of the MahabodhiTemple in India, the supposed

Architecturally, the temple is celebrated for its adoption of "Indian style",

which might be recognized by Thailand tourists who have also taken India tours. Indian culture has had a huge

impact on Southeast Asia, and many Thailand travellers delight in drawing parallels between the religious, architectural and artistic forms of the two countries.

Lisu hill tribe villages are found near Chiang Dao, Pai, and Phrao. This

particular hill tribe originated from Yunnan and is divided into six

original patrilineal clans. Years of relative isolation have given rise to

unique customs, such as having a shrine for a guardian spirit set above

their villages. These spirit shrines can be dedicated to the sun, the moon,

water, trees and more, but most commonly they are made for ancestors.

The Lisu people of Thailand are known for their colourful clothing.

young elephants. Dedicated to showing the amazing intelligence of these

in the river and paint pictures. Visitors on Thai tours may also take an

optional elephant ride around the jungle.​ 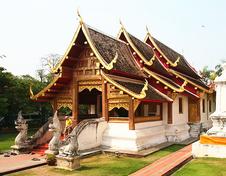 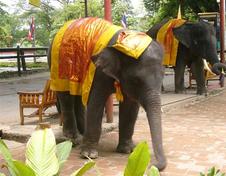 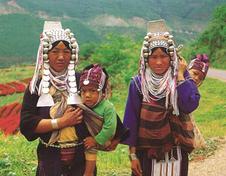 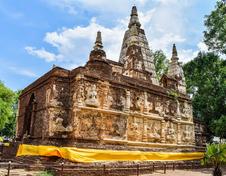 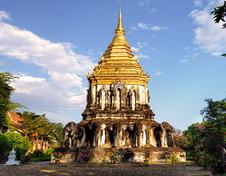 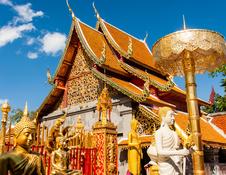