Cambodia When to Go

Seasons
Cambodia, like its neighbours, is influenced by the tropical mainland

from March to May; and the wet rainy season which lasts from June to

October with the rainiest months in September and October, which in

turn are also cooler than the previous months.

Weather
In Cambodia’s cool season, weather is warm yet balmy and during the evenings and nights the temperature drops pleasantly. The cool season is perfect for exploring Cambodia’s numerous cultural and world heritage sites. The hot season arrives in March and brings with it humid high temperatures which last until May or early June when the seasons begin to change and rain arrives. The rainy season is characterised by heavy afternoon rain showers which comes to head in September and October, the months that receive the most rain. The rainy season nourishes Cambodia’s rural life and livelihood as the countries massive inland lake, Tonle Sap, actually influences the directional flow of the Mekong in the rainy season.

When to go
The best time to experience Cambodia’s splendid tropical beauty and world heritage temples and ruins is in the cool dry months between November and January.

Additional Remarks
Cambodia’s off season in the rainy months between May and October can also be a nice time to go as prices are lower and there are fewer travellers; not to mention the forest and canals near Angkor Wat are full and brimming with life, however be wary of flooding in the rural areas. The hot season may be too hot for some, however the splendid and jovial atmosphere of Khmer New Year or Cambodia’s version of Theravada Buddhist New Year in April aren’t to be missed.

What to Bring
Walking shoes for exploring Cambodia’s vast temple complexes is a must and don’t forget a sweatshirt for cool nights as the temperature shift between the heat of the day and the evening can feel quite drastic. Because of Cambodia’s humid tropical climate, plenty of changes of socks and undergarments are encouraged. 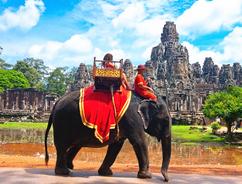