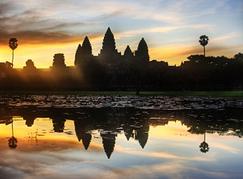 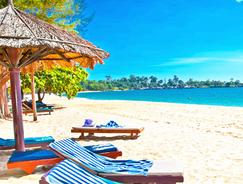 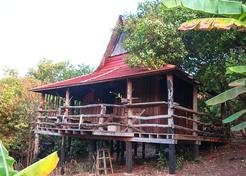 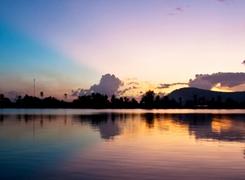 Cambodia’s architectural jewel, Angkor is world-famous and the iconic

shrouded Ta Phrom, Angkor’s temples are awe-inspiring. The experience of watching the sun rise over Angkor Wat is unforgettable and not to be missed.

borders Laos and Vietnam.  This is one of the least explored regions of

Indochina and is renowned for its spectacular natural attractions and the

variety of its indigenous cultures.

Many ethnic minorities live in Rattanakiri and trekking to rural villages

gives an opportunity to understand more about their traditional ways of

living.  Near to Banlung is Yeak Loam Lake; this peaceful spot is encircled by dense forest and situated in the crater of an extinct volcano.  Natural and cultural wonders abound in this remote province.

Battambang lies at heart of rural Cambodia and its quiet, laidback nature belies its status as Cambodia’s second-largest city.  It’s situated by the River Sangker, a tranquil body of water which winds its way through the province. The city is home to the some of the best-preserved French colonial architecture in Cambodia and its palm-lined streets are shared by cars and horse carts.Leaving Battambang by road, the scene quickly turns to one of small villages, rice paddies and farmland, and it’s these rural surroundings which help to create it’s small town feel.

​Set on the Kampot River, Kampot Town’s status has faded since the

development of a major port at Sihanoukville.  Its trading history is

reflected in its crumbling old shophouses and its sizeable Chinese and

Kampot is a great base for exploring nearby Bokor National Park. Blessed

with pristine rainforest, the park is home to many endangered and rarely

bears. Yet Bokor’s biggest attraction is the abandoned French colonial hill station Mount Bokor whose decaying colonial buildings have recently been joined by a major hotel and casino development.

Cambodia’s capital is a chaotic and hectic city, its heady smells and noise an exhilarating challenge to the senses.  Home to the golden Royal Palace and Cambodia’s fascinating National Museum, Phnom Penh also boasts includes new hotels, shops and restaurants along its tree-lined boulevards. The Tuol Sleng Genocide Museum and The Kiling Fields give an insight into the shocking violence and destruction caused by the Khmer  Rouge, but this brave city, once known as ‘The Pearl of Asia’, is boldly striving forward into a new future.

​​Siem Reap
Siem Reap is the gateway to the Angkor Wat temple complex. Just a few

years ago its only visitors were hardy backpackers, but in the last decade

markets and cafes have been joined by luxury resorts, fashionable bars

and international restaurants, yet there is still an easygoing air.Shopping

of Angkor to responsible tourism enterprises which engage traditional

Kep’s mixture of French style and Cambodian hospitality combines in

its renowned Crab Market, actually made up of wooden shacks on stilts

perched over the Gulf of Thailand. You can enjoy the famous local dish

where modernity seems an ocean away.

Located on the Gulf of Thailand on Cambodia’s southern coast,

and a range of leisure activities are the major attractions here.

Sihanoukville , then called Kompong Som, sprang to life in 1955 and

it’s known for its sandy beaches and tropical islands.  Accessible by fast

boat, Koh Rong retains its appeal as a ‘party island’ while Koh Rong 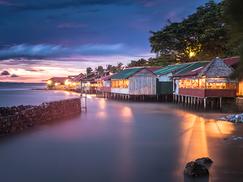 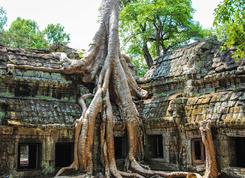