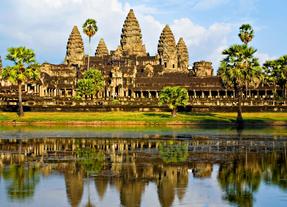 2020 The Trails of The Khmer 5-day
Guaranteed Departure Based on Min. of 2 Passengers with Thursday Arrival in Siem Reap

When arriving in Siem Reap, you will be greeted by our professional tour

guide at the airport and then transferred to the hotel. The rest of the day

will be free for your own leisure.

Visit Roluos Group Temples
The Roluos Group of monuments mark the beginning of Khmer classical art, and they represent some of the earliest great temples built by the Khmer. They served as the capital of Indravarman (who reigned from 877 to 889). Lolei was built on an islet by Yasovarman I (who ruled from 889 to 910), the founder of the first city of Angkor. The sandstone carvings in the niches of the temples are notable as are the Sanskrit inscriptions on the doorposts. Preah Ko was erected by Indravarman I in the late 9th century in dedication to his defied ancestors in 880. There are inscriptions in Sanskrit on the doorsteps of each temple. Bakong was built and dedicated to Shiva by Indravarman I, and is the largest and most interesting of the Roluos Group of temples and still has an active Buddhist monastery.
Visit a temple for sunset

Watch the sun set over the Cambodian countryside from the upper terraces of an ancient Angkorian temple.

The crown jewel of Khmer architecture, Angkor Wat is the national symbol and the highlight of any visit to Cambodia. The largest, best preserved, and most religiously significant of the Angkor temples, Angkor impresses visitors both by its sheer scale and beautifully proportioned layout, as well as the delicate artistry of its carvings. To approach the temple, first cross the vast moat, continuing along a broad causeway lined with naga balustrades. Upon entering the main structure, ascend through a series of galleries and courtyard before reaching the central sanctuary, which offers beautiful views back over the causeway and across the surrounding countryside.

On the way, stop to enjoy the intricate stone carvings that adorn nearly every surface of the temple, with some 1,700 Apsaras, or celestial dancers, sculpted from the walls. Along the outer gallery walls run the longest continuous bas-relief in the world, which narrates stories from Hindu mythology, including the famous Churning of the Ocean of Milk. Angkor Wat is stunning at any time of the day, but sunrise and sunset are especially beautiful times to watch the play of light on the stones.

Visit Angkor Thom
The fortified city of Angkor Thom covers an area of 10 square km. Enclosed by a wall and wide moats; the city includes many of Angkor's most popular sights. Enter by the monumental South Gate over a causeway lined on either side by statues of demons and gods, each carrying a giant naga. Continue to the Terrace of the Elephants and the Terrace of the Leper Kings, former spaces for public ceremonies, both adorned with dramatic bas reliefs.
Visit the ruined Baphuon, Royal Enclosure and Phimeanakas before continuing to the mysterious Bayon Temple. In this temple, one of the most popular and compelling in Angkor, explore the galleries of beautifully preserved bas reliefs and ascend narrow stairs to reach the central sanctuary, where giant stone faces smiling enigmatically down from every angle.
Visit Ta Prohm temple
Ta Prohm is one of the most popular attractions of Angkor as much of the jungle has not been cleared and it looks very much as most of the Angkor monuments would have appeared when European explorers first stumbled across them..

Visit Preah Khan
Preah Khan is a temple built by King Jayavarman VII with towering enclosures and shoulder-hugging corridors in a jungle setting. Preah Khan covers a very large area but the temple itself is enclosed within a rectangular wall of around 700 by 800 metres.
Visit Neak Pean Temple
Neak Pean was built by King Jayavarman VII (ruled 1181 to 1201), it is a Buddhist temple consisting of a square pool with four smaller square pools arranged on each axis. In the centre of the large central pool is a circular island encircled by two nagas with intertwined tails.
Visit Ta Som
Ta Som was built in the late 12th century by Jayavarman VII for his teacher, Som. Ta Som means old Som.
Excursion to Banteay Srei

Banteay Srei was built in the late 10th century, it is a Hindu temple dedicated to Shiva. The temple is square with entrances on the east and west. Of main interest are the three central towers which are decorated with male and female divinities and beautiful filigree relief work.

​*The accommodation will be provided in the above hotel or similar in case the priority hotel is unable to accommodate the booking.

*All prices are per person in CAD, based on twin-sharing in double rooms in the default hotel for above listed category.

Single supplement will be charged starting from 2 passengers up for each passenger occupying a single room.