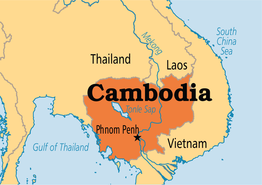 Religion
Cambodian religions are strongly influenced by early Indian and

Chinese cultures. As early as the beginning of the Christian era,

most Funan people were followers of Brahmanism (a forerunner

of Hinduism). Theravada Buddhism entered the country in the

13th century and was reintroduced as the national religion in 1989.

Today almost 90 percent of the population is Theravada Buddhist

and the faith has a large influence on everyday life. At some point

during their lives most Cambodian males spend some time in a monastery, and almost every village has a Buddhist temple around which village life centres. Cambodian Buddhism appears an easygoing faith and tolerates the ancestor and territorial spirit worship that is widely practiced.

People
Cambodia has a total of approximately 12 million people, 90 percent of whom are Khmers. The Khmer are believed to have lived in the region from about the 2nd century AD and have been influenced over the centuries by the powerful Indian and Javanese kingdoms.

Other ethnic backgrounds include Chinese, Vietnamese, Chams and hilltribes called Khmer Loeu that live in the forested mountain zones, mainly in the north-east. Traditionally they were semi-nomadic and practiced slash and burn agriculture. In recent years increasing numbers have turned to settled agriculture and adopted many of the customs of the lowland Khmer.

Art & Architecture
The majority of Khmer art and architecture date from the Angkor period when decoration was influenced by mystical and religious beliefs. All the surviving monuments are built of stone or brick, and all are religious buildings. Common motifs in Khmer sculpture are apsaras, or celestial nymphs who represent the ultimate ideal of feminine beauty at that time. Other motifs are nagas, or sacred aquatic snakes, which play an important part in Hindu mythology.
Temples were designed to represent the cosmic Mount Meru, the home of the gods of Indian cosmology, surrounded by oceans. Angkor Wat, the Cambodian architectural masterpiece, follows this design.

Etiquette
– In Cambodian culture it is unseemly to show too much emotion so avoid losing your temper over problems and delays.
– You should always take your shoes off when entering a temple or when visiting private houses.
– You should never touch anybody’s head intentionally as it is regarded as a particularly holy part of the body.
– Accordingly, the feet are literally the lowest part of the body so do not point your feet at anybody or at a Buddha image.
– Sensitivity to politically related subjects in conversation is advisable.
– It is polite to ask permission before taking photographs of Cambodians, particularly monks.

Dance & Theatre
There is a strong tradition of dance in Cambodia, which has its origins in the sacred dances of the apsaras, the mythological seductresses of ancient Cambodia. Dance also became a religious tradition designed to bring divine blessings to the king and his people.

During the Angkor period classical ballet dancers were central to the royal court and followed a very structured form. Folk dancing is less structured, with dancers responding to the rhythm of drums while they act out tales from Cambodian folk stories. The drummer has the most important role in folk music as he sets the rhythm. There is no system of written notation so the tunes are transmitted orally from generation to generation.

Shadow plays are also a popular form of entertainment in the countryside. They are based on stories from the Ramayana, embroidered with local legends and the characters are cut out of leather and often painted.