Vietnam is rapidly developing but holds onto the charming

traditions and culture which make it such a fascinating holiday

destination.  History has left its mark on Vietnam by way of

Northern Vietnam boasts some of the country’s most spectacular

of centuries of change in its wide Parisian boulevards and

colourful Chinese temples. The seascape of Halong Bay is a

from the sea and floating villages sit languidly in the bay.

Central Vietnam offers historical cities and sweeping beaches.  Hue, the old imperial capital, is home to the Citadel, Royal Tombs and the famed Perfume River. The UNESCO-listed city of Hoi An uniquely well-preserved and its streets are lined with old shophouses, Chinese temples, chic bars and fashionable restaurants. The thriving modern city of Danang showcases its fire-breathing Dragon Bridge and sits only a few kilometres away from a golden shoreline.

The Mekong Delta is blessed with lush fertile land where villagers in traditional conical hats work in vibrant green rice paddies and traditional boats with dragons’ eyes ply the murky waters.  Ho Chi Minh City’s wartime past is displayed at the Cu Chi Tunnels and War Remnants Museum but this vast metropolis is also full of modern bars, shops and restaurants. 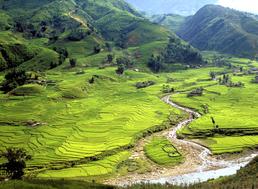