Thai culture has been shaped by many influences, including Indian, Lao, Burmese,

Cambodian, and Chinese. Its traditions incorporate a great deal of influence from

evolved over time to include many regional beliefs originating from Hinduism,

animism, as well as ancestor worship. The official calendar in Thailand is based on

the Eastern version of the Buddhist Era (BE), which is 543 years ahead of the

Several different ethnic groups, many of which are marginalised, populate Thailand.

Some of these groups spill over into Myanmar, Laos, Cambodia and Malaysia and

have mediated change between their traditional local culture, national Thai, and

society, particularly in and around Bangkok. Their successful integration into Thai society has allowed for this group to hold positions of economic and political power. Thai Chinese businesses prosper as part of the larger bamboo network, a network of overseas Chinese businesses operating in the markets of Southeast Asia that share common family and cultural ties.

As with other Asian cultures, respect towards ancestors is an essential part of Thai spiritual practice. Thais have a strong sense of hospitality and generosity, but also a strong sense of social hierarchy. Seniority is paramount in Thai culture. Elders have by tradition ruled in family decisions or ceremonies. Older siblings have duties to younger ones.

Thailand's prevalent religion is Theravada Buddhism, which is an integral part of Thai identity and culture. Active participation in Buddhism is among the highest in the world. According to the 2000 census, 94.6% of the country's population self-identified as Buddhists of the Theravada tradition. Muslims constitute the second largest religious group in Thailand, comprising 4.9% of the population. 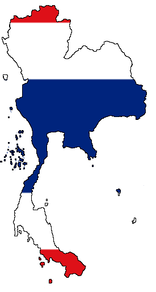