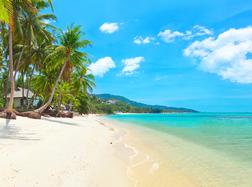 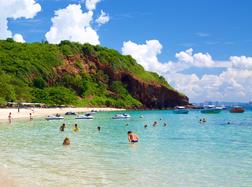 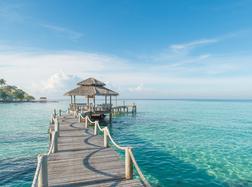 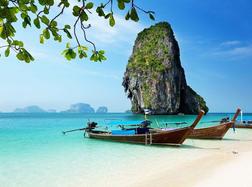 Gulf of Thailand. Koh Samui is easily accessible and features

beautiful beaches and a variety of activities for Thai travellers on

any budget. Until the late 20th century, Samui was home to a

golden sand beaches by the shore, it was developed into an

waters, extensive coral reefs, deep caves,  and some of the most

photogenic sunsets in Thailand. The sunsets are often accompanied

from a beachside bar or restaurant.

While not the top destination in and of itself, Krabi Town is a charming provincial capital located along the banks of a river flowing into the Andaman Sea. This makes Krabi an important port city for both local fisherman as well as boats ferrying visitors to nearby attractions, including Koh Phi Phi, Koh Lanta, and Railey Beach—one of the premier rock climbing destinations in the world.

Phuket is an island province served by Phuket International Airport.

The name Phuket is apparently derived from the word Bukit in

Malay, which means mountain or hill, as this is what the island

appears as from a distance.

tropical forest adventures, speed boating and the vibrant nightlife on

Pattaya is a vibrant east coast city with a population of 400,000. It

has become one of Thailand’s main attractions for tourists who

experiences, including golfing, go-cart racing, and visits to the

private Sri Racha Tiger Zoo, the waterpark, and numerous other

Tower. At its top, Thailand travellers can get awesome views of the