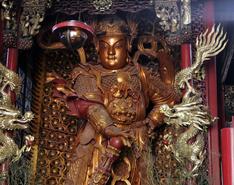 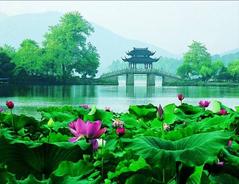 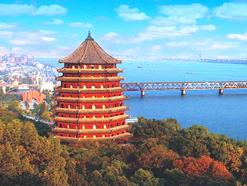 A popular honeymoon destination, Hangzhou is a place for leisure and sensual pleasure. As the capital of Zhejiang Province, it lies on the banks of Qiantang River about 97 kilometers from the Pacific Ocean. Hangzhou is famous for being the southern terminus for the Grand Canal, a massive waterway that once connected the city to Beijing in the north. Now Hangzhou is a quaint provincial town that is best-known for its scenic attractions, such as the beautiful West Lake. Throughout history its beauty has frequently been recorded by locals and foreigners alike. Early China traveller Marco Polo, for instance, wrote about its captivating women and lovely temples and gardens. Although some of its historical buildings have been destroyed over the centuries, parts of the town

The picturesque crystal waters of West Lake are surrounded on three

connected by immense causeways, which are the result of water-control

work done in the Tang and Song dynasties. The entire lake is

West Lake is a must-see for all visitors to this region.

brocade products make great souvenirs to bring back from a