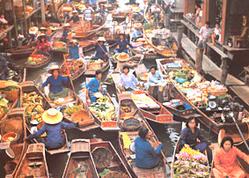 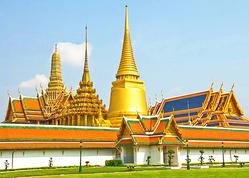 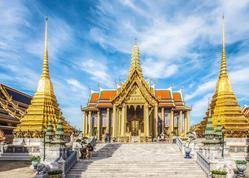 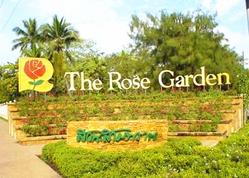 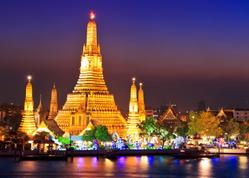 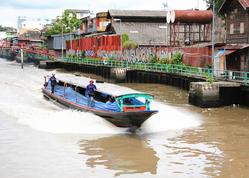 Bangkok , the capital city of Thailand, was founded in 1782 by the

people live in and around Bangkok accounting for approximately

one fifth of the total population of Thailand. Thailand was not

colonized by western powers, so its distinct culture is still well

preserved. Within Bangkok, there are hundreds of Buddhist temples,

beautiful palaces and modern amenities like shopping malls, the

All Thailand tours to Bangkok should visit the Grand Palace. The

Prasat Palace. The Amarin Vinitch Throne Hall was originally a

Now it is used for coronation ceremonies. The Dusit Maha Prasat

Palace was first used as a venue for royal audiences but now it has been turned into a Royal Funerary. The Chakri Maha Prasat Palace is not open for public tours. It is used for royal banquets to honour visiting heads of state.

The Temple of the Emerald Buddha

Buddha. The relic is said to have been formed when a lightning bolt

struck a chedi in Chiang Rai, around 1434. It was later discovered

that the nose had a crack and the interior was green. In 1778, King

Rama I brought the Emerald Buddha to Bangkok. Each year, the

reigning king gives it three different seasonal ceremonies: one for

summer, one for winter, and one for spring.

The floating market in Bangkok provides an entertaining experience

of local life. The small canals (called klongs) are crowded with flat

boats full of fruits and vegetables, fresh coconuts and even cooked

include a trip to this vibrant marketplace.

The canal banks of Bangkok are truly an amazing experience for

Thailand travellers. On the journey, visitors can watch local people

busy with daily activities. The Saen Saeb Canal is the longest canal

in Bangkok and connects the Chao Phraya River to the Bang

hectares of beautifully designed and well-crafted gardens and a lake.

In the Rose Garden, Thai tourists can experience local restaurants,

shows. There are also many areas to have a quiet picnic. The Rose